The collection "Media Literacy: Classic and New Dimensions" is now available, including the reports from the International Scientific Conference held on 28 and 29 October 2021 in Sofia under the same title and organized by the Faculty of Journalism and Mass Communication of Sofia University "St. Kliment Ohridski.
The conference was attended by 86 researchers and lecturers from 16 universities from 13 countries. Bulgarian participants came from 8 universities, the Bulgarian Academy of Sciences, various institutions, organizations and media. 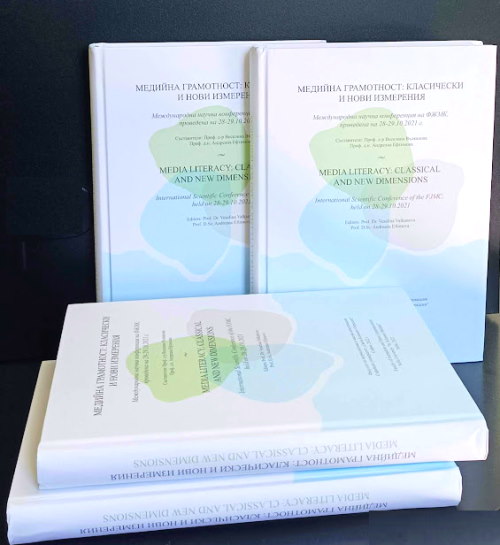 The theme of the conference and the proceedings fits perfectly into the most controversial and important issues of contemporary journalism and media, the contemporary communication environment. As Prof. Dr. Veselina Valkanova writes in the preface, "to a large extent, the loss of trust in the media is related to the commercialization and retreat from the public functions of journalism, to the common deliberate transgression of the quality of journalism in PR and mass culture. There are several interrelated processes - an apparent retreat from the role of a corrective and independent institution, the transformation of the media into sellers of image and influence, the filtering and manipulation of information, the abuse of media influence, the substitution in the selection of topics and accents, one-sided views and conjunctural influences. Therefore, quite naturally, in today's complex social situation, the issue of media literacy is becoming more central".
The preface also notes that "for more than 45 years as a faculty of St. Kliment Ohridski University in Sofia, the oldest and most prestigious higher education institution in Bulgaria, the Faculty of Journalism and Mass Communication has been training specialists for the social communication system, the media industry and the field of public communication, and the Journalism major will soon celebrate its 70th anniversary.... FJMC's pioneering role in media literacy training, which began in Bulgaria in our UNESCO Department of Communication and Public Relations. Media Pedagogy/Media Literacy training at the Faculty of Journalism and Mass Communication (FJMC) of St. Kliment Ohridski University in Sofia has many traditions."
This volume contains the research and papers of colleagues from 12 Bulgarian universities and practicing journalists who participated in the conference and discussed with their colleagues from foreign universities and educational organizations topics such as: professional standards of journalism; media art and art journalism; visual and non-verbal communication in the media; media in a pandemic; infotainment for the pandemic; media languages; media and audiences - changing communication; the world, values, media; communication challenges; and the media as a medium.
The Proceedings of the International Scientific Conference "Media Literacy: Classical and New Dimensions" reflects the achievements and research on the topic and will strengthen the scientific and professional interest in current issues related to media literacy and the fight against misinformation and harmful communication phenomena in contemporary society.
The collection is also published online in PDF format in the collection of FJMC "Media and Communications" in the scientific portal of Sofia University "St. Kliment Ohridski".