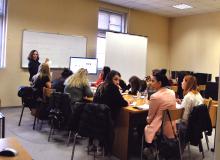 The “Communication, Public Relations, and Advertising Department” at the Faculty of Journalism and Mass Communication at the Sofia University “St. Kliment Ohridski” is created at November 6th, 1995, as a result from a project led by Mr. Pier Andre Hervot, then president of the International Public Relations Association (IPRA) by initiative of the FJMC at Sofia University, with the support of Mr. Alain Moduet – then director of the “Communications” Department at UNESCO and of the UNESCO’s National Commission for Bulgaria. Communication should be understood as a power for building of trust between the people who participate in the building of the democratic society – that is the basic direction in the university preparation of public relations specialists, which is ensured by this Department.
The curriculum for the new major at the FJMC, which started in the 1994/1995 academic year, is a double result from this project, which is developed accordingly to the recommendations of the International Public Relations Associations (IPRA), and of the Republic of Bulgaria’s Ministry of Education and Science. Hundreds of specialists – Bachelors and Masters – who graduated from the FJMC at the Sofia University, work as public relations specialists in all spheres – economics, politics, science, culture, and dozens of them have been awarded with Bulgarian and foreign awards for their professional activity. The Department is a co-founder and a member since its creation of the world network of departments of UNESCO – ORBICOM (www.orbicom.uqam.ca), which encompasses 30 departments of UNESCO and more than 250 members in 72 countries around the world. Prof. Dr. Todor Petev has been a member of the Board of the directors of ORBICOM from 1996 to 2000, and Assoc. Prof. Dr. Minka Zlateva has been a member of the Board of the directors of ORBICOM since November 2006.
At its creation, the Department took the obligation both to prepare staff in the field of advertisement and PR, and to help the formation of a professional society of public relations specialists in Bulgaria. The first department chief is Prof. Dr. Todor Petev /1995-2003/ - in 1996 he was a co-founder of the first PR professional association in Bulgaria – The Bulgarian Public Relations Society (BDVO), and Assoc. Prof. Dr. Minka Zlateva, who has led the department since May 2003, for 6 years /1997-2003/ has been a member of the Governing Board of the BDVO. Since 1997 the UNESCO Department along with the Bulgarian Public Relations Society conduct annual international scientific conferences on current problems of public communications and public relations that include 4 modules: theoretic discussion, round tables between theoreticians and practicing specialists /PR specialists and journalists/, PhD students’ seminar and a student studio.

The topics of the so far conducted conferences are:

The eighth international scientific conference on the topic of “Public Communication and Globalization: Education in Democracy Values” was conducted on May 20th and 21st, 2005 in Sofia. It was dedicated to the 10 year anniversary of the creation of this Department of UNESCO /2005/, to the 10 year anniversary of the beginning of the high education on public relations at the FJMC at SU /1994-1995/ and to the European Year for Democratic Citizenship through Education /2005/, which was announced by the Council of Europe. For the first time researchers from the United Kingdom, Ireland, and Portugal have participated in this conference. Since the very beginning, PhD students from this department have participated in the international scientific conferences of the UNESCO department, and from 2002 independent Seminars for PhD students have been conducted as part of the conference. In these Seminars have participated PhD students from the FJMC and other faculties at the Sofia University, from New Bulgarian University, Shumen University “Bishop Konstantin of Preslav”, Varna Free University “Chernorizets Hrabar”, University of Ruse “Angel Kanchev”, as well as their colleagues from Austria, Greece, North Macedonia, Poland, Czech Republic, and Lithuania.
At the suggestion of FJMC students in 2004 as part of the Seventh international scientific conference of UNESCO’s department of “Communication and Public Relations”, a Student Workshop was conducted. It has become an inseparable part of the conferences’ program – and in it Bachelor and Master students present their reports and multimedia presentations on the conference topic.

The reports from all international scientific conferences of the department has been published in collections of reports:

Lecturers from this department have published more than 20 books and other collections of scientific articles that ensure the educational process and that are actively used by researchers in the field of media and public relations. Among them are:

At the initiative of UNESCO’s Department of “Communication and Public Relations” at the FJMC at SU and with the generous co-operation of the Ministry of Education, Science, and Culture of the Republic of Austria and of the Sofia Abroad Bureau of the Austrian Institute for Eastern and Southeastern Europe, the textbook by Prof. Dr. Roland Burkhart from Vienna University “Nauka za komunikatsiyata” (prevod M. Zlateva, izd. “PIK” Veliko Tarnovo, 2000, 496 s.) was published. It is the best textbook on communication among the German speaking scientific community in Europe. At the initiative of Assoc. Prof. Dr. Minka Zlateva in 2004 was created COMFORUM Sofia-Vienna – a permanent form of co-operation between specialists on public communication in Bulgaria and Austria that is organized along with the Bulgarian Scientific Institute in Austria and the “Friends of Dom Wittgenstein” Association, which have conducted four sessions (2004, 2005, 2006, and 2007).
On the occasion of the 10th anniversary of the establishment of the department, a Jubilee book “Parvoto desetiletie. Vrazki s obshtestvenostta za demokratsiya /1995-2005/”, whose editors are Prof. Dr. Todor Petev, Assoc. Prof. Dr. Minka Zlateva, and Assoc. Prof. Dr. Sonya Aleksieva. Its premiere was during the festive celebration of the jubilee – on November 30th, 2005, in the presence of the president of ORBICOM Mr. Allain Modouet.