The Faculty of Journalism and Mass Communication and the Media Programme of the Konrad Adenauer Stiftung organised "Digital Change in Television and the Special Responsibility of Public Service Media".
The event took place in the Aula Magna of the Faculty of Journalism and Mass Communication and online on the ZOOM platform and was followed by over 100 students, lecturers and journalists. It was opened by the dean of the faculty prof. Vesselina Valkanova, who introduced the official guests - the Ambassador of the Federal Republic of Germany Christoph Eichhorn and Hendrich Zietrich - Director of the Media Office for South East Europe of the Konrad Adenauer Foundation, as well as the lecturer Dr. Peter Frei - Editor-in-Chief of the German public broadcaster ZDF.

Prof. Dr. Veselina Valkanova expressed her pleasure that the faculty is hosting events like today's open lecture. She stressed that today's event of the Faculty of Journalism and Mass Communication together with the Media Office of the Konrad Adenauer Foundation under the title "Adenauer Lectures" provides an opportunity for professional meetings of students, lecturers, journalistic community and researchers with leading professionals from Germany. The Dean recalled the first event in 2019 with the participation of Stefan Dethien, head of the Berlin and Brussels studios of the German public broadcaster Deutschlandradio.

"I have no doubt that today's public lecture of the series on "Digital Change in Television and the Special Responsibility of Public Media" will also attract the interest of our colleagues, and that Dr. Peter Frei, as a leading figure in media and communications in Germany with a long career in television, will introduce us to his experience, to current professional issues of public media," said Prof. Deutchen. Valkanova. She expressed her confidence that lectures such as today's contribute to professional conversations and discussions between students, lecturers, researchers, practitioners on such important topics for contemporary media and the media environment.

According to the dean, transformations in the environment, the societal functions and roles of journalism, its quality as a corrective and independent institution, pluralism and media freedom and influence are topics to which we owe a broad and in-depth debate. Particularly with regard to public service media. 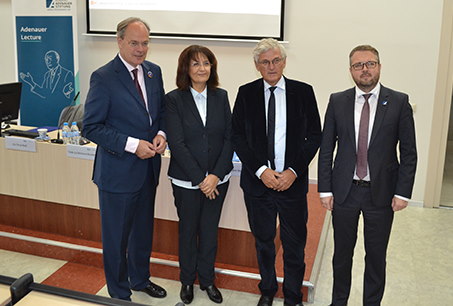 "In a dynamic and fast-changing broadcasting environment, competition from major media players, digitalization and widespread use of various platforms and social networks, public service media are placed in a complex situation," said Prof. Vulkanova added that they simultaneously represent a sphere of media freedom and democracy, to which all viewers and listeners should have access, offering diverse information and content and implementing a programming policy that is in the public interest and serves different age groups, minorities, socially diverse people, responds to cultural specificities and offers thematically diverse content.

She drew attention to the fact that, on the other hand, and at the same time, public service broadcasters, along with the quality and public character of their programmes, must compete for audiences and viewership, precisely to be able to fulfil their public service remit - to offer topical journalism, news, investigations, documentaries on social issues, to protect the interests of children and adolescents, different social groups and consumers, and in watchable formats.

The Dean of the Faculty of Journalism and Mass Communication further stressed that in the face of competition and the challenges of the digital environment, public service media have public duties that require the provision of information and content for a wide audience of citizens and this mission is above ratings and market positions.

"We are delighted that it is Sofia University that can host and meet the College with professional perspectives to introduce the audience to practices, trends, experiences, to make important comparisons with the development of the media environment in other European countries," said Prof.. "Public Media in Bulgaria - Governance, Regulation and Programming Policies", organized by the Faculty of Journalism and Mass Communication. She expressed her confidence that the analyses and discussions on the new media environment and the public media service providers BNR and BNT, their management, programming and funding; legislative changes and the role and place of regulators in the development of public media will take place because they are topical and important issues not only for the Bulgarian community but also for Bulgarian society as a whole.

"Because the public media not only in Bulgaria, but everywhere in the world, need a thoughtful governance model that will create conditions for an independent, sustainable and clear programming policy, for achieving stability in the management and operation of public media service providers, and hence - a sustainable programming policy and the guarantee of their public mission," added Prof. Prof. Valkanova.

She further stated that she has outlined purely Bulgarian issues that are looking for solutions, which are facing legislators, regulators and expressed her opinion that it is the academic community, researchers and media for ethical and objective journalism can and should unite to assist public media in Bulgaria in fulfilling their public missions; to organize initiatives that support the efforts of journalists to change the environment and products; to respond to crises in the media; to cooperate with journalistic and media

"I think that today's lecture and discussion on a German media outlet with already nearly 60 years of history in the public-legal record can provide a starting point for a new series of public discussions that the Faculty of Journalism and Mass Communication as an academic institution will organize and that are related to the media environment worldwide and at home, to programming policies, legislation, governance, regulation and professional standards in public media," said Prof. Valkanova.

Hendrik Zittich, Director of the Media Office for Southeast Europe of the Konrad Adenauer Foundation, thanked the management of Sofia University and the Faculty of Journalism and Mass Communication for the successful partnership. In his speech, he pointed out that the event addressed the issue of digital changes in public media. He recalled what the media was like in his childhood and outlined the changes that have taken place in it in the following decades. Today, he said, we need to adapt to their new developments. He noted that the lecture would provide an opportunity to learn about the activities of ZDF, which is the most popular public television channel in Germany. Hendrik Zittich introduced the lecturer, one of Germany's best-known journalists, who has covered many important events such as the German elections, a correspondent in Washington, and is now editor-in-chief of the Berlin studio. According to Hendrik Zittich, through this lecture, important aspects related to the Faculty of Journalism and Mass Communication are discussed. He pointed out that the students of the faculty are the future of the media in Bulgaria and he is glad to be able to support them in their development. Hendrik Zitich pointed out the opportunities for young people to receive scholarships and continue their development. He expressed his belief that public media is an essential part of a democratic society and in order for journalists to be independent, they must have an adequate working environment, adequate pay in order to have quality content in the material they produce.

The Ambassador of the Federal Republic of Germany to Bulgaria, Christoph Eichhorn, thanked for the invitation and welcomed Dr. Peter Frei to Sofia. The Ambassador recalled his work years ago when he was a journalist. He touched upon the topic of values and principles that serve as a guideline in the work of journalists. He said that journalists and diplomats work in a similar way and there are many parallels between them and highlighted the issue of their responsibility. He said the professions have changed a lot through digitalization. According to him, today with this wave of information, the role of journalists is changing and they have become a guiding beacon shining and directing their beam in the great sea of information - their aim is primarily to bring light into the darkness. Christoph Eichhorn also touched on the topic of media freedom, which is extremely important. According to him, one of the elements of this discussion in Bulgaria is to whom the public media are accountable. He stressed that they should only be accountable to the public, the central point of the media's activity should be the good of the public, and politicians should create such laws that guarantee the independence of editorial activity, of leadership in the institutions, and provide funding for these media so that they can do their work in this way.

Dr. Peter Frei thanked for the invitation, for the collegial presentation and for the interest shown in the public media in Germany. In his lecture, he touched upon the topic of digital changes and the structure of public media in Germany, the fight against fake news, the conditions in which public media in Germany operate, etc. He presented the media he works for and said that we always have to adapt to current events. He also recalled major political events of the past years and that journalists must adapt to current events. These changes are an essential part of democracy and very important for their work. Because we are the ones who have to cover all these changes, said Dr. Peter Fry. 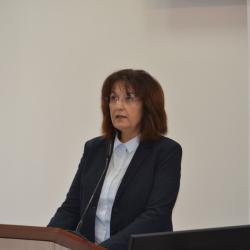 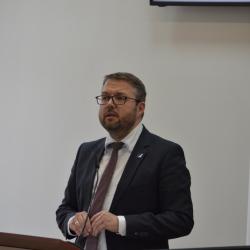 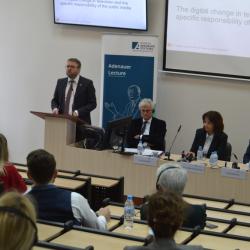 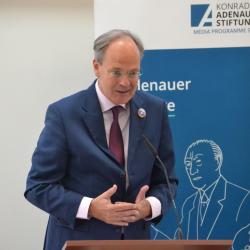 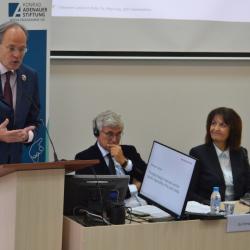 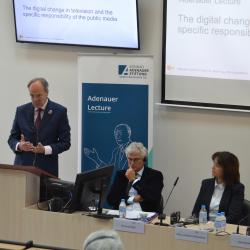 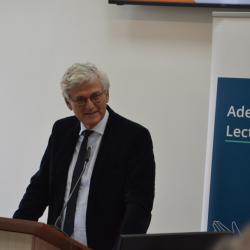 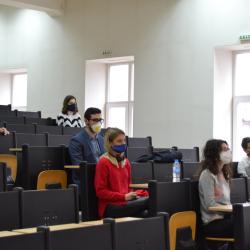 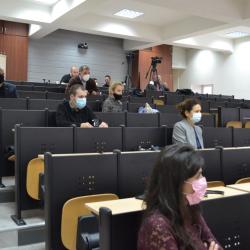